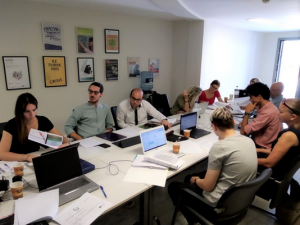 The 2nd Transnational Meeting of MATE (“Mingle, Acknowledge & Trust Events”), an innovative, studentcentered approach to intercultural skills acquisition for local students and young migrants (Erasmus+ project, action KA203, December 2018-2020), took place on 26-27 September 2019, at the premises of the Aristotle University of Thessaloniki in Greece.
All partners (M.M.C. from Cyprus as coordinator, Cyprus University of Technology, Aristotle University of Thessaloniki from Greece, Folkuniversitetet Stiftelsen Kursverksamheten Vid Uppsala Universitet from Sweden, FH Joanneum Gesellschaft mbH from Austria, Eurocircle Association from France, and University of Alicante from Spain) met for the second time to review the progress of project’s ongoing intellectual outputs, elaborate on intellectual outputs to start implementing soon, and monitor the project’s management and coordination, the dissemination of activities, and the quality assurance.
At the first day of the meeting, M.M.C. made an overview of project’s progress, giving then the floor to partners responsible for the first two intellectual outputs. Most specifically, the University of Alicante reviewed the National Reports prepared by partners on common forms of Hate Speech both online and offline, in order for a consolidated European report to be prepared soon (IO1) and Eurocircle presented the latest version on the Intercultural Skills Assessment Online Tool, in order for partners to reflect on the provided questionnaire and for the tool to be finalised (IO2). Subsequently, the Cyprus University of Technology presented the first steps for the preparation of the “Report Racism” curriculum and training material (IO3) and M.M.C. took again the floor, giving to partners a general idea of the Methodological Guide for the MATE Facilitators and relevant activities, the “MATEvents” (IO4). For this reason, a workshop was conducted at the end of the first day, asking from partners to decide on the most suitable human universals to be converted into activities promoting intercultural skills.

At the beginning of the second day, M.M.C. continued by giving further information on the fourth intellectual output and conducted a second workshop on the structure of the MATE activities, asking from partners for feedback on a provided template. The coordinator also gave an overview of the three Learning Activities of the project, which will take place in parallel with its 3rd Transnational Meeting in France and are very significant for the project, as well as of the six Multiplier Events, which will take place at national level, concluding with a final multiplier event in Cyprus. After finishing the presentation of ongoing and prospective intellectual outputs, FH Joanneum proceeded with a presentation on quality assurance, relevant indicators, and aspects to be amended in order to achieve better monitoring of project’s quality, while Eurocircle with a presentation on the dissemination of project’s outputs, deliverables, and activities, focusing on its online presence, press releases, and newsletters. At the closure of the day, there was a general discussion and overall evaluation of the two-day meeting.

The MATE project is funded with the support of the European Commission. 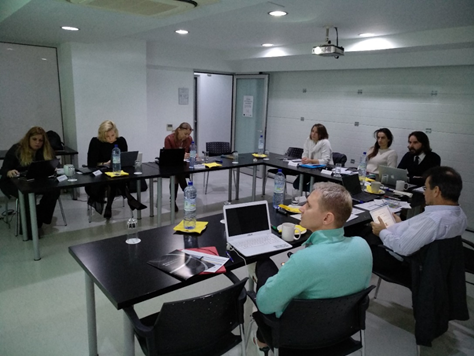